AMID worsening drought in the Eastern Cape, the roll-out of a new alien invasive plant clearing project in the Kouga and Kromme River systems near Kareedouw and Joubertina is set to substantially increase the water flow to three of Port Elizabeth’s supply dams while bringing much-needed job creation to the Langkloof region.

Implemented by Gamtoos Irrigation Board on behalf of the Department of Environmental Affairs, the one-year National Resource Management project has employed 61 contractors and 800 workers to clear 950 densely populated hectares along the Diep River and its tributaries.

According to Gamtoos Irrigation Board’s area manager, Edwill Moore, eradicating these alien invasive species will bring some relief to the drought-stricken region by increasing the flow of water into the Impofu Dam as well as the Kouga and Churchill dams downstream.

“This on-going drought has placed enormous pressure on our storage dams. Alien invasive trees – in this case, mainly Black Wattle – consume huge amounts of water, which would otherwise flow into these dams,” said Moore.

“Clearing alien invasive plant species is one of the most cost-effective ways of increasing our water supply.”

Kouga Dam, a major supply dam in the region, currently stands at 32.8% full, while extraction from the Impofu Dam, which is the second biggest, has been halted after its water level dropped to a critical 17.5%.

He said the contractors and their teams of 12 previously unemployed workers had been appointed from the local communities of Misgund, Louterwater, Krakeel, Joubertina and Kareedouw.

“We advertised for contractors in the Kou-Kamma municipal area. A community liaison committee – consisting of five ward councillors and two ward committee members per ward – assisted in shortlisting a pool of potential contractors.”

Moore said the successful bidders were then asked to appoint their own teams – on the condition that the workers had to be drawn from the unemployment lists in the five wards. 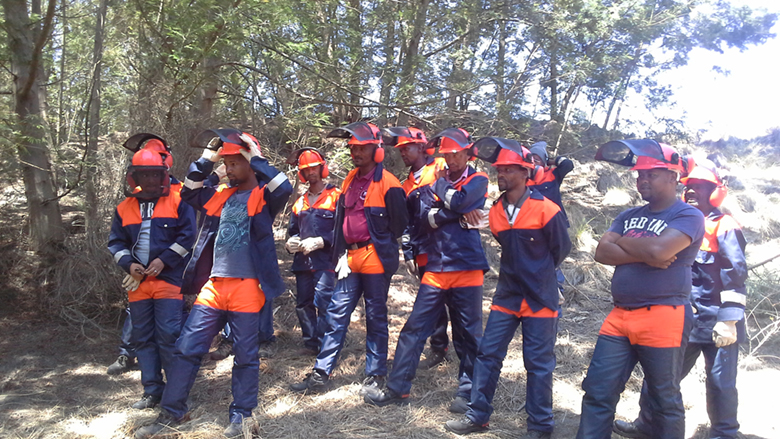 “Each team comprises three chainsaw operators to fell the trees along the riverbanks and three herbicide applicators to ensure that the stumps don’t grow back, assisted by two general workers. There are also two health and safety reps to maintain a safe working environment and a pair of first aiders in case of an injury on duty.”

You have Successfully Subscribed!