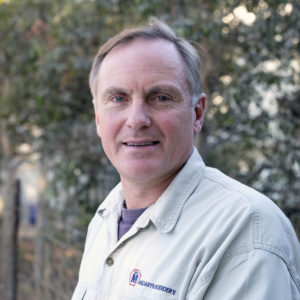 The Gamtoos Irrigation Board and members of the extended Gamtoos Valley community are saddened by the loss of one of their own, after an illness bravely fought.

Born on 6 December 1965, Tertius represented the fourth generation of Meyers in the Kleinsrivier farming district near Hankey. He completed his schooling at Nico Malan High School in Humansdorp and then pursued a BSc in Agriculture at the University of Pretoria.

Two years of national service followed and then, in 1990, he was ready to join his father on the farm. He began farming with 30ha of citrus, primarily the Cape naartjie.

He married Carina, a music teacher, and they have two children: Lara, who has a degree in industrial engineering, and Warren, who, like his father, studied BSc Agriculture, but at Stellenbosch University, where he majored in economic analytic management.

A true man of the soil, Tertius and his wife lived on the farm in the house that his great-grandfather Jan Hendrik Meyer built in 1898. They farm 200ha citrus and have their own packhouse, Mandaryn, where Tertius’s father helps out when he visits from Jeffreys Bay, where he has retired.

More than 18 citrus cultivars are grown on the farm and it was Tertius’s dream to convert the original packhouse into a farm museum. Another hobby of his was to farm with Bonsmara cattle and so there are a number of these beautiful animals on the farm in Mossel Bay.

Warren, who will be taking over Tertius’s farming activities, says of his father: “He didn’t work a day in his life. Farming was his passion and his great love. Even in his last days, all he wanted was ‘to farm a little more’. That was his life.”

Tertius was known for responding wherever he sensed a need, donating fruit to the church, the elderly and schools; paying school fees for several deserving pupils and even contributing towards medical care for people in need in the valley.

“One of his dreams was to see the BBBEE farm he’d established continue into the future, but this was not to be,” says Warren.

The Gamtoos Irrigation Board comprises three regions: Hankey, Patensie and Loerie/Mondplaas. Tertius served on the Board since 2003, initially representing the Hankey district. He took over the role of chairman in 2011, after the passing of Merwe du Preez.

Tertius’s appointment to the role came as a natural result of his involvement in agriculture and his personal experience of the scarcity of water as a resource in the area. He was always concerned about the future of water in our country.

“Water must be stored, like a life policy for food security,” he said. Tertius believed the answer lay in building more dams.

Over the past four years, in particular, there were enormous challenges in terms of water resources, but none so harsh as the 80% water restriction that was imposed and the Kouga dam dropping to a critical level.

Despite this, Tertius indicated: “Much is being spent to limit water losses and we can see results.” He was impressed by the extent of co-operation from the farmers.

“In my role as a new CEO, it was wonderful to have discussions with Tertius and to take in his perspective on things,” she says. “He was able to debate an issue; he was logical and analytical, and above all fair. These were qualities that served him well as chairman of the Board.

“The Board itself is one where people work together well as a team and where decisions are made in that spirit. It is a group that strives for renewal and innovation and embraces and builds on the democratic South Africa that is.

“Tertius was a man of vision and integrity. He was a good leader who will really be missed. He was taken away from us too soon.”

You have Successfully Subscribed!